The 2019 BSRG workshop ‘Palynological Applications to Sedimentology’ was held at the University of Aberdeen from the 17th-19th February. The trip was led by palynology experts Dr. Adam McArthur (University of Leeds), Dr. Alena Ebinghaus (University of Aberdeen) and Dr. Manuel Vieira (Shell), organised by Dan Tek from the University of Leeds, and sponsored by the International Association of Sedimentologists (IAS) and Shell. Twenty researchers from institutions across Europe flocked to the Granite City for an introduction to the weird and wonderful world of palynology.

Our group outside the Meston Building, University of Aberdeen, at the end of the workshop.

After a day of travel and an evening of informal introductions, the workshop began in the morning of the 18th February with a scenic walk, guided by Adam, from the accommodation to the University. The workshop kicked off with an introductory presentation by Adam McArthur, defining palynology, the distinction between palynology and palynofacies, and the applications of both techniques to a variety of problems in almost all sedimentary environments. We then headed to the sample preparation laboratory for an overview of the sample preparation process. Due to the time-consuming and dangerous nature of palynology sample preperation using various acids, best practice was covered with the help of props, and a strong emphasis was placed on health and safety.

Adam and Ilse, the palynology lab technician, explaining the dangers of hydrofluoric acid.

The trip to the lab was followed by a core workshop led by Alena Ebinghaus on core from the Boltysh Crater lake, Ukraine, from which palynological studies have been used to uncover the mysteries of its post-K/Pg boundary fil. The participants were given some time to examine the core and note any interesting features before Alena took the group through the interpretation and explained the palynological work that has been undertaken on the core.

Alena discussing the features in this fascinating core with the group.

After lunch it was time to get hands-on with the critters! Microscopes were set up and the eager trainee palynologists spent some time exploring the microscopic world on the slides. Palynological slides were provided first by Alena, who has used this palynology data to investigate terrestrial lava-sediment interactions on drainage systems in Washington State, USA. The participants were challenged to identify and sketch the types of pollen and spores. Next, Adam provided three slides to each group from different deep-water sub-environments from outcrops in Baja California, Mexico, to showcase the value of palynofacies in palaeoenvironmental reconstructions.

Participants trying to identify the various types of pollen, spores and other organic matter under the microscope.

To top this busy day of learning, the participants were then invited to discuss their work specifically with the course leaders on a one-to-one basis. These conversations carried on as the group headed into Aberdeen for a meal and to the pubs to sample some of Scotland’s finest whiskeys. 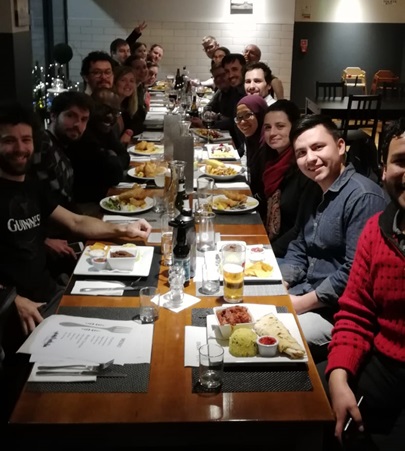 Our group enjoying a meal at Manuel’s favourite local eateries.

The second day, run by Manuel Vieira, was industry focused and aimed to exemplify the key application of palynology to wider biostratigraphy, and to subsurface interpretation. Manuel first gave an introduction to biostratigraphy, using examples to demonstrate the drastic changes that can be made to subsurface well correlation based on biostratigraphy and palynology. We were then given an industry-style exercise whereby two logs were correlated using biostratigraphic and palynological markers, uncovering a drastic change in reservoir properties. After a wrap up session and some feedback it was time to say goodbye to our fellow course mates and leaders.

A massive thanks to our course leaders Adam McArthur, Alena Ebinghaus and Manuel Vieira for providing such an insightful, engaging and fun workshop, and to all who attended the workshop!